ESSL has decided to carry out all its events in 2020 online. We have collected experience with organizing such events and have received mostly positive feedback. That being said, we aim to organize event on site in Wiener Neustadt in 2021 as soon as the virus situation allows it. We are looking forward to welcoming participants personally to our expanded facilities.

More details about ECSS2021 and hotel and travel information will appear on the conference web site by November 2020.

Researchers at the European Severe Storms Laboratory (ESSL), Munich Re, the Ludwig-Maximilians University Munich (LMU) and the German Aerospace Centre (DLR) could show that damaging convective weather events including lightning, hail and severe wind gusts are likely to become more common across Europe until the end of this century. An increase in convective instability as a result of rising humidity near the earth’s surface was identified as main reason for the increase in hazard frequency.

They applied a set of additive logistic regression models (AR-CHaMo) to an ensemble of 14 regional climate simulations to predict the frequency of severe thunderstorms and its associated hazards in Europe under projected anthropogenic climate conditions.

They projected a slight decrease in thunderstorm occurrence in southwestern and southeastern Europe, but an increase in the probability of severe weather. Large hail (≥ 2 cm) is projected to become 40%-80% more likely across central Europe in the RCP8.5 scenario by the end of the 21st century (Figure c ) while very large hail is projected to become more likely across most of Europe, with a doubling possible in parts of central and northeastern Europe (Figure i).  As a consequence of the rising hazard probabilities, risk models will need to be adapted and public warnings and precautionary measures should be issued as storms approach.

More information on this study can be found in this open access article:
Anja T. Rädler, P.H. Groenemeijer, E. Faust, R. Sausen and T. Púčik, 2019: Frequency of severe thunderstorms across Europe expected to increase in the 21st century due to rising instability, npj Climate and Atmospheric Science, DOI:10.1038/s41612-019-0083-7

We have decided to extend the deadline for the submission of abstracts for the ECSS conference (4 – 8 November, Kraków, Poland) to 10 May. To submit an abstract or register, please see https://www.essl.org/cms/european-conferences-on-severe-storms/ecss-2019/

During recent days, pronounced severe convective storm activity has occurred across Europe, reports of which have been collected into the ESWD with help of ESSL’s partners. In total, we have received over 360 reports in the past 7 days. A majority of them were of large hail (184 reports), followed by severe wind gusts (79 reports) and heavy rainfall (66 reports). The first notable event was 29th April, where a tornadic supercell tracked more than 500 km from central France to Belgium. Wind damage caused by this supercell is still being investigated to confirm possible occurrence of several tornadoes along its path. On 1 May, a long-lived supercell over eastern Poland produced a hail swath 300 km long with hail up to 5 cm in diameter. And one day later, series of severe storms struck Croatia, Slovenia, Hungary and Austria. Hail up to 6 cm in diameter was observed over northeastern Slovenia, damaging houses and numerous flash floods were reported from Vienna, where storms persisted for several hours. 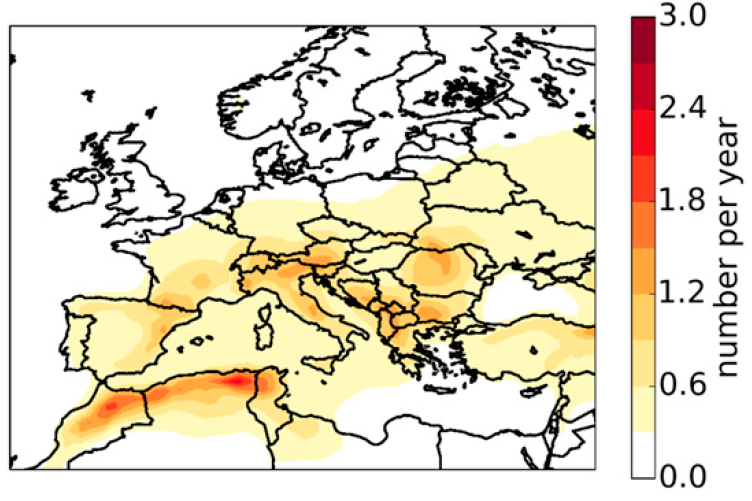 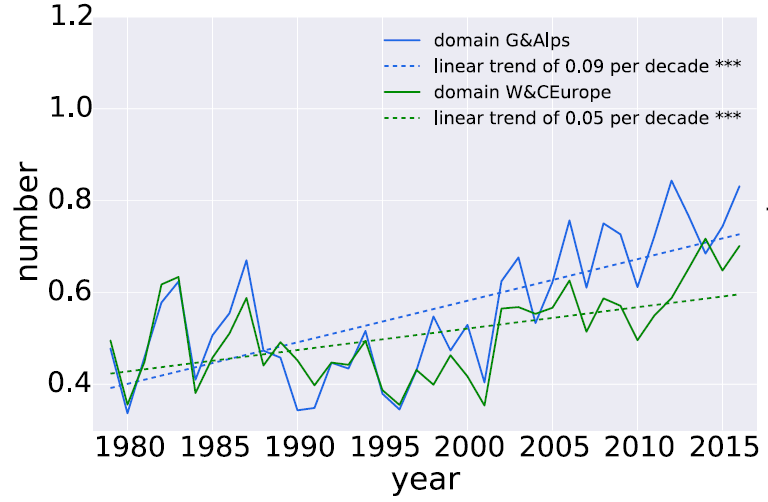 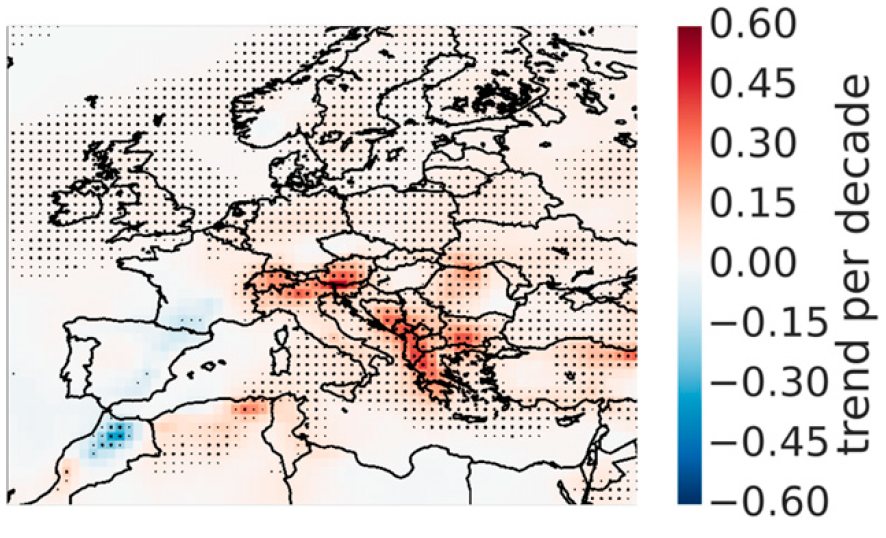 The Bulletin of the American Meteorology Society has published an article that summarized the accomplishments of ESSL in it first 10 years of existence, such as the ESSL Testbed, Climate research and, of course, the European Severe Weather Database. Read the article on-line at: 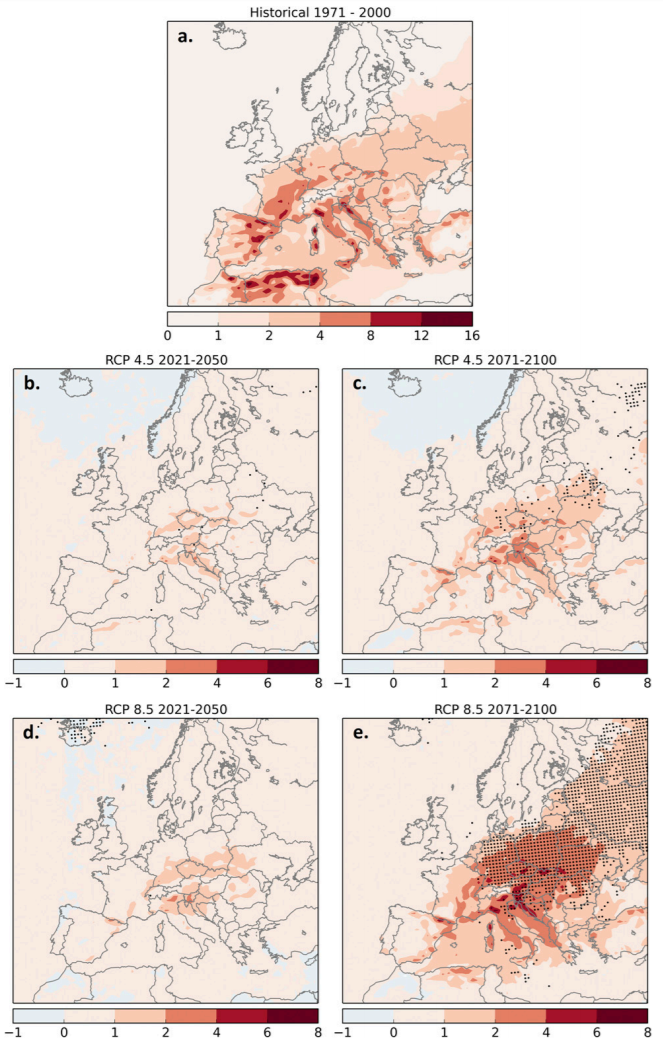 From 18 to 22 September 2017, the ninth edition of the European Conference on Severe Storms (ECSS) will take place in Croatia. ESSL will organize the conference in collaboration with the Croatian HydroMeteorological Institute. Click here for more information…

Within the RAIN project, ESSL researchers Tomáš Púčik and Pieter Groenemeijer have produced projections of severe weather changes according to the EuroCordex regional climate model ensemble.

The ESSL researchers found that the consensus of the model projections suggested a 10 – 30% increase of severe convective weather events across much of Europe and 30 – 60 % in south-central Europe in the business-as-usual rcp8.5 scenario by the end of the century. These increases would be about half as large in the rcp4.5 scenario that assumes moderate climate change mitigation efforts.

RAIN project partners of the Finnish Meteorological Institute, Freie Universität Berlin and the Technical University Delft have investigated other hazards, such as wind storms, floods, forest fire and winter weather.

For more information on the RAIN project, projections of other hazards, and a link to the full report: