Severe hailstorms can cause extensive economic damage to both crops and properties. Report by Munich RE shows that damage of individual events can exceed billions of dollars as the risk has increased in the past decades. Hail damage to properties, such as cars, roofs and windows, becomes substantial when the diameter of hailstones approaches and exceeds 5 cm. Each year there are a number of such events when hail of this size occurs across Europe and this year, 2018, was no exception.

By looking at the ESWD dataset, we found 26 days, when hail exceeded 5 cm and caused significant damage to the properties. The spatial distributions of these major hail events and associated hail sizes can be found in in Fig. 1. The largest hail size was observed on 8 June 2018, when the town of Črnomelj, Slovenia was hit by giant hail up to 12 cm in diameter, destroying hundreds of roofs and cars. The hail swath on that day (40 km) was much shorter compared to long-lived hailstorms of 1 May in Poland (220 km) or the hailstorm of 30 June in southern Russia (200 km). 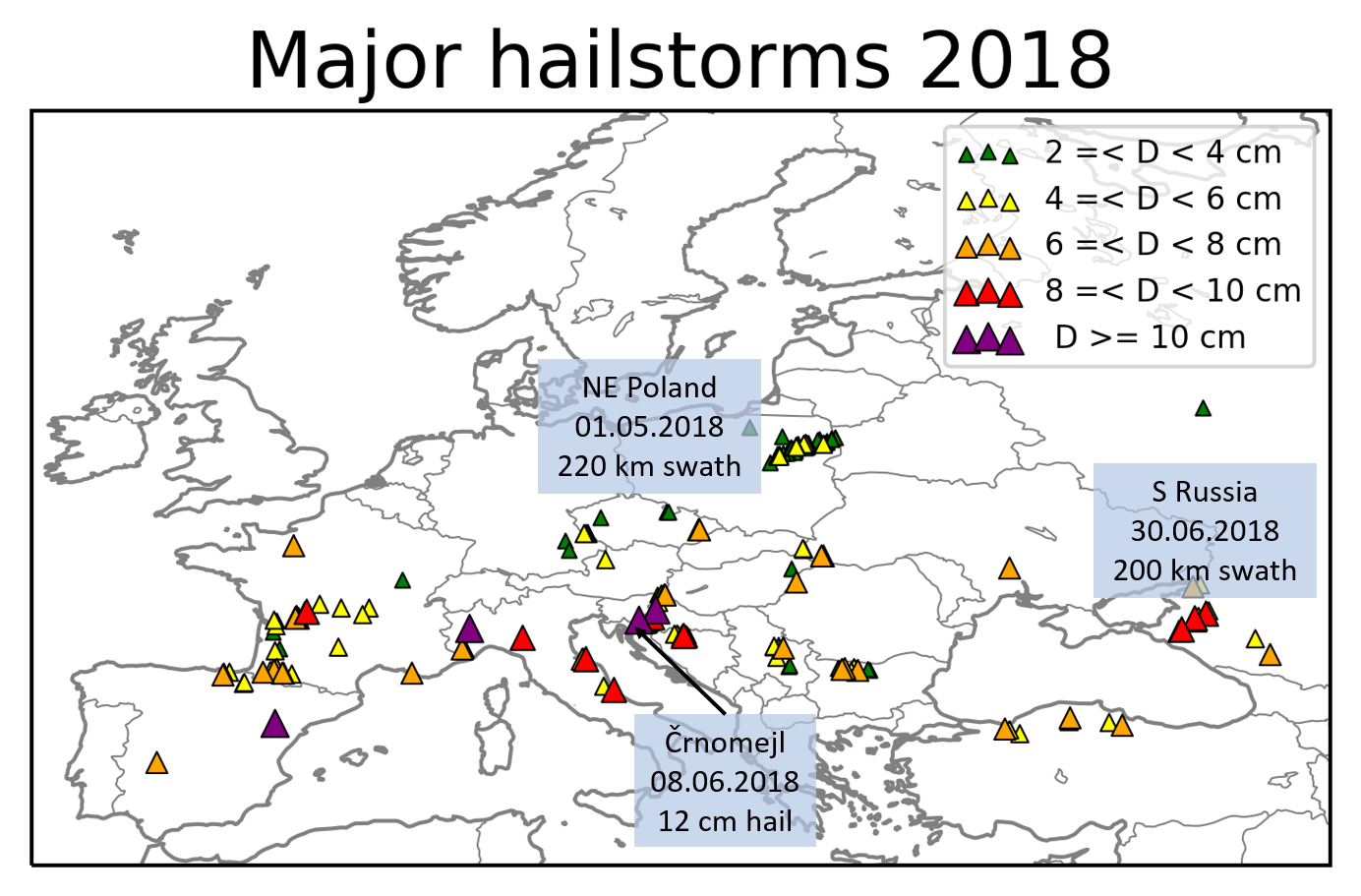 Fig. 1. Severe hail reports associated with 26 damaging hailstorm events over Europe in 2018. Size and colour of the symbol represent the observed hail size.

These damaging hailstorms occurred in an environment of moderate to high CAPE and bulk 0–6 km wind shear exceeding 15 m/s, conditions which favour strong updrafts and well-organized convection, including supercells. Our research shows that such conditions may become more frequent in the future. As we compare with the sounding database developed by Pucik et al (2015), most of these events occurred in typical conditions for damaging hailstorms (Fig. 2). Several of these events formed in rather weak vertical wind shear (i.e., bulk 0-6 km shear ranging from 10 to 15 m/s) but these cases were confined to the proximity of complex orography, where shear could be strongly enhanced locally. 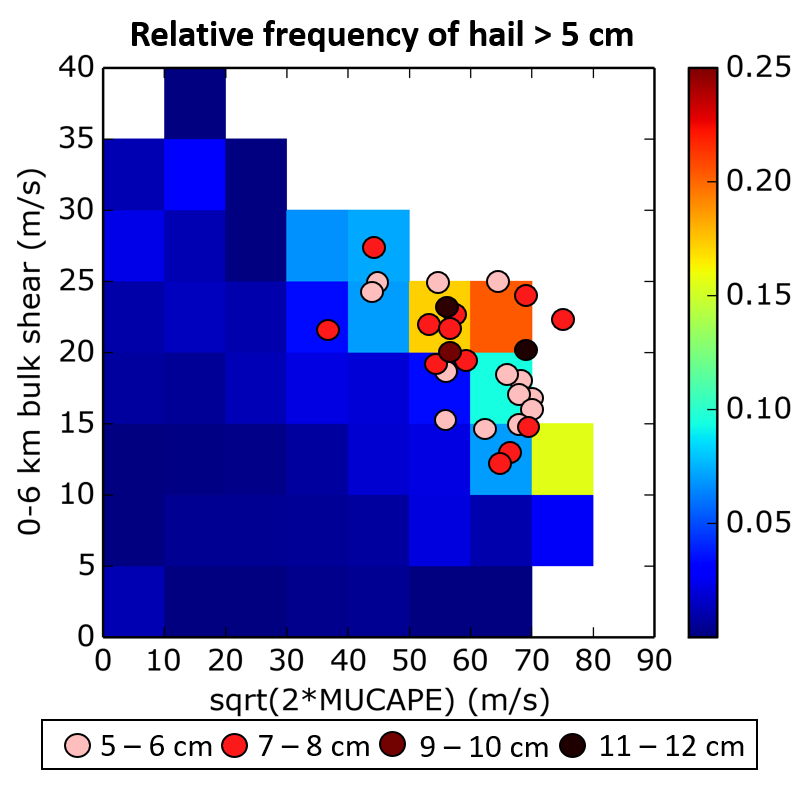 Fig. 2. Environments of damaging hailstorms over Europe in 2018 (dots) compared to the relative frequency of hail > 5 cm (colour bar) as a function of CAPE and 0-6 km bulk shear based on Pucik et al (2015). Colour of dots represents the maximum observed hail diameter with each event.

01.05.2018 (Poland). An isolated supercell cut a 220 km long hailswath across the regions of Mazowieckie and Podlaskie in northeastern Poland with hail up to 5 cm in diameter.

02.05.2018 (Slovenia). Very large hail was recorded in the districts of Lendava, Murska Sobota, Gornja Radgona and Ljutomer in northeastern Slovenia, with hailstones up to 6 cm in diameter. Hail damaged cars and roofs.

15.05.2018 (Bulgaria). Very large hail hit several villages and towns within a 120 km long path tracking through the districts of Vraza and Pleven in northwestern Bulgaria with hailstones up to 7 cm in diameter. Extensive damage to cars and trees was reported from the town of Pleven.

24.05.2018 (Spain). Hailstorm hit the town of Garciaz in Extremadura province, southwestern Spain, with hailstones up to 7 cm in diameter. Cars, roofs and fruit plantations were damaged by the storm.

08.06.2018 (Slovenia and Croatia). Two very severe hailstorms occurred in Slovenia and Croatia. The town of Črnomelj in southern Slovenia was particularly hit as supercell produced hail up to 12 cm in diameter. Hundreds of cars, roofs and solar panels were seriously damaged. Another supercell hit the districts of Karlovačka, Zagrebačka and Krapinsko-Zagorska in central and northern Croatia. Hail up to 10 cm in diameter hit Grabovec town, damaging cars.

11.6.2018 (Germany and Czech Republic). Violent, wind-driven hailstorm from supercell damaged roofs, facades and windows in  Furth im Wald town in Bayern state, southeastern Germany, and along the Czech-German border. Hail up to 6 cm in diameter was observed.

12.6.2018 (Ukraine). Supercells produced very large hail over Uzhhorod town and Irshava district in Zakarpatska province, southwestern Ukraine. Car rear windows and roof tiles were smashed by hailstones up to 6cm in diameter. On the same day, a violent hailstorm hit villages in the northern parts of Bihor County in western Romania. Hodoš village was worst hit by hailstones up to 6cm in diameter, destroying roof tiles.

13.6.2018 (Serbia). Supercell produced wind-driven hail with diameter up to 6 cm over central and east Serbia. Extensive damage to crops, windows, roofs, cars and facades of houses was observed.

14.07.2018 (Italy). A severe hailstorm hit Piemonte province, northwestern Italy. The town of Chivasso was hit by giant hail up to 10 cm in diameter. Cars and roofs were damaged during the hailstorm.

16.07.2018 (Italy). Several instances of very large hail, up to 8 cm, were reported from Marche province, eastern Italy. Hail caused extensive damage to cars in the town of Pesaro and surrounding villages.

24.07.2018 (Turkey). A strong hailstorm hit parts of Kastamonu province in northern Turkey causing extensive damage to cars and houses in Kuzyaka and Seyh villages by hailstones of at least 5 cm in diameter.

05.08.2018 (Czech Republic). Very large hail up to 6 cm was reported from villages in Zlín and Olomouc regions, eastern Czech Republic. Cars and roofs damaged by the hail.

02.09.2018 (Italy). Very large hail up to 8 cm was reported from Abruzzo province, eastern Italy with extensive damage to cars and roofs.

13.09.2018 (Turkey). Severe hailstorm with hail up to 6 cm in diameter hit Kastamonu city in northern Turkey. Extensive damage was inflicted to cars and houses.