The third most socially impactful convective windstorm case in 2017 occurred on 11 August, in a belt from the northern Czech Republic to northern Poland with 6 fatalities and many injuries.

Situation began with a quasi-linear convective system over Austria and the Czech Republic, which formed around 10 UTC, paralleling strong prevailing flow in low to mid troposphere. However, at this point, only marginally large hail and heavy rain occurred as the system remained elevated. System progressed northward towards the borders of the Czech Republic and Poland, encountering progressively warmer airmass near the surface. As soon as the system became surface based around 15 UTC, it began producing severe wind gusts (Fig. 1). Widespread forest blow downs were noticed already on the Czech side of the border. As the system moved towards north-northeast, it encountered increasingly favourable conditions for severe convection, strengthened and eventually transformed into a large bow-echo at 18 UTC. Just before this transition, an embedded supercell formed within the system, as evidenced by high reflectivities near the apex of the system (Fig. 2). Besides severe wind gusts, large hail up to 5.5 cm was observed at this point. Transition into the bow-echo was accompanied by a rapid increase in the severe wind damage reports. As the system moved offshore to the Baltic Sea after 22 UTC, it produced a 42 m/s wind gust at Milejewo near the coastline. A continuous swath of wind damage was noted from the northern Czech Republic all the way towards the Baltic Sea coastline in a 7 hour long rampage. A spectacular shelf cloud accompanied the passage of the bow-echo (Fig. 3) 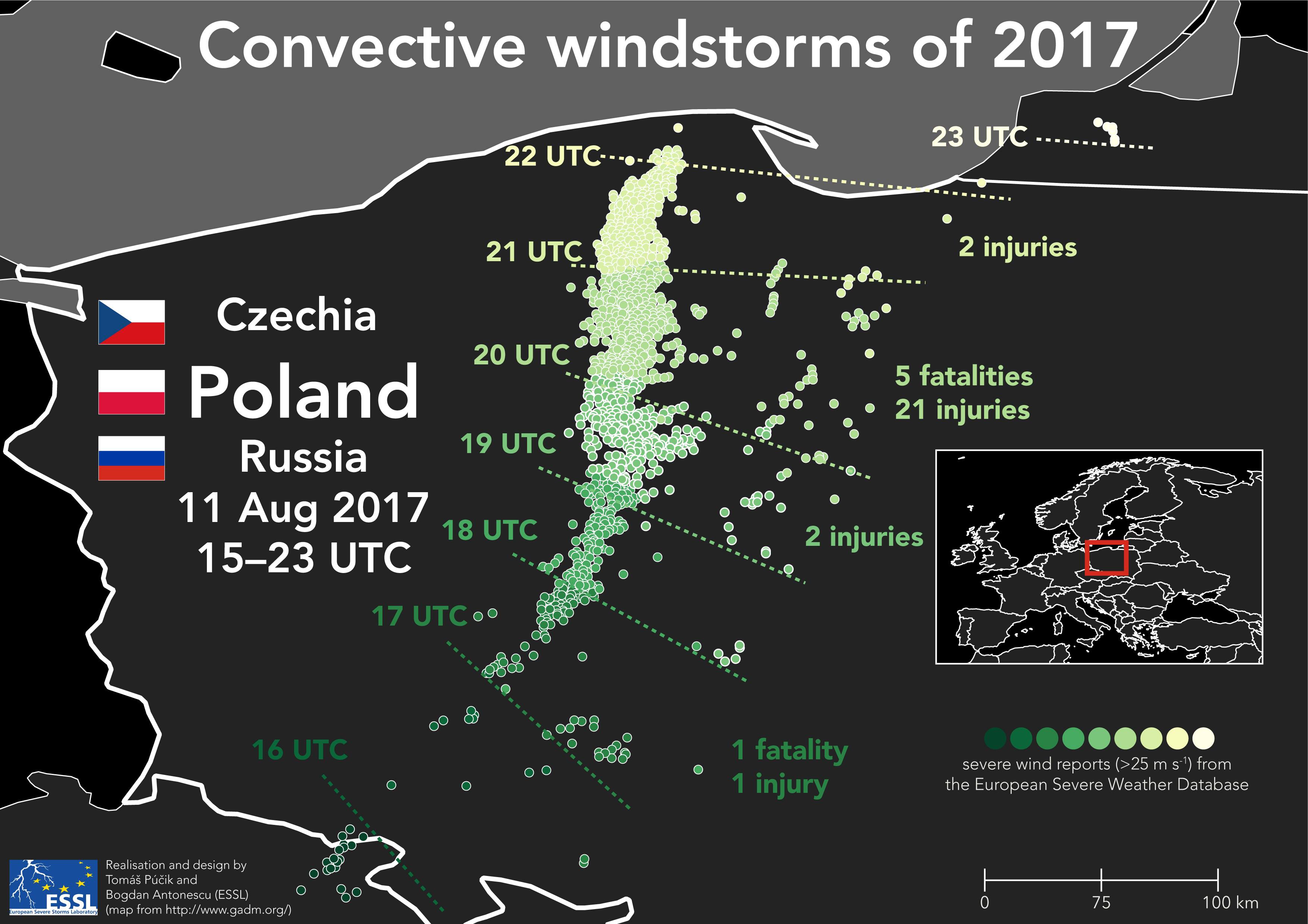 Fig. 1 Chronological progression of severe wind reports in a convective windstorm of 11 August 2017 across northern Czech Republic and Poland. 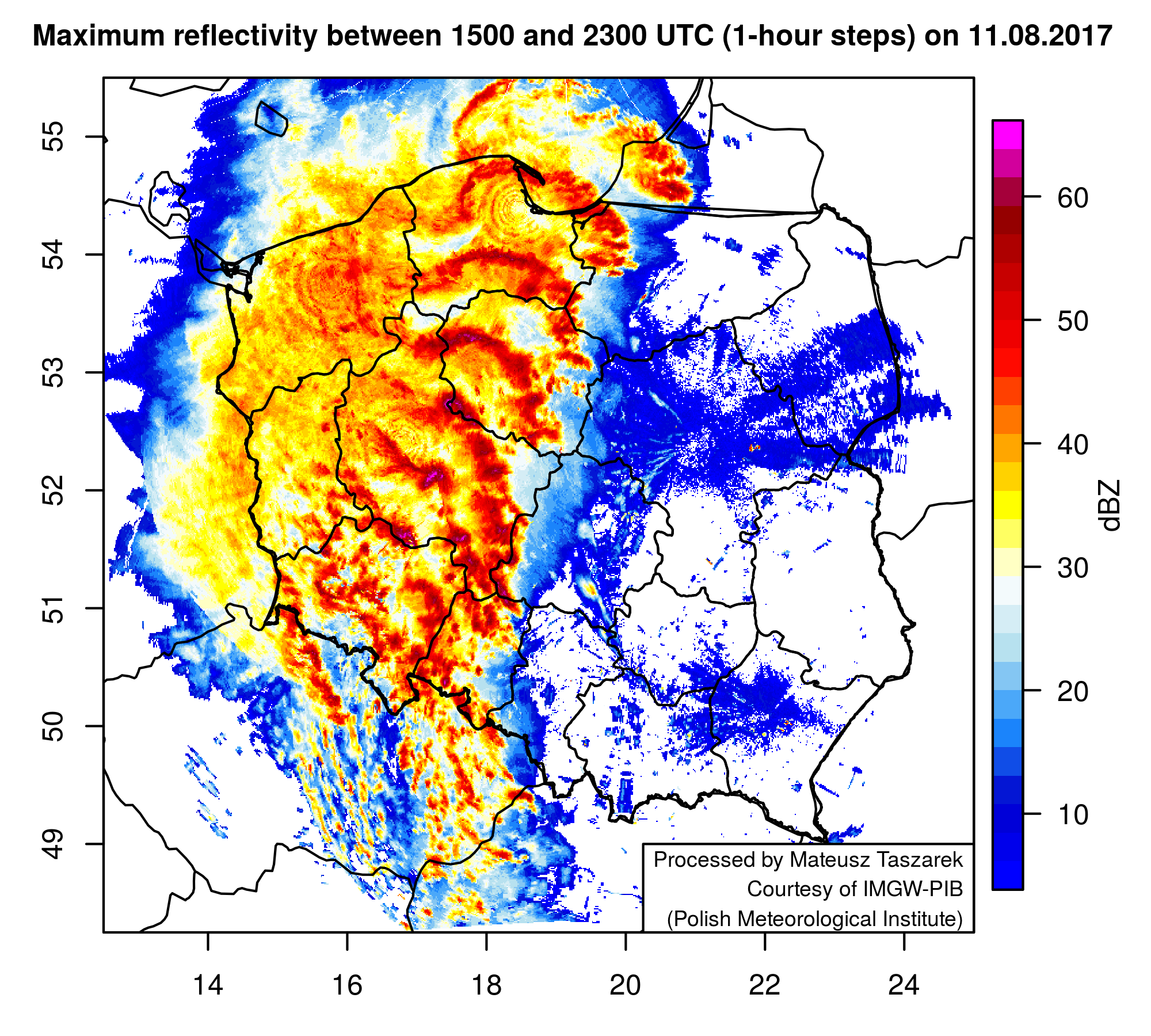 Fig. 2 Composite image of maximum reflectivity in vertical column at the hourly time steps between 15 and 23 UTC. Courtesy of Mateusz Taszarek and IMGW. 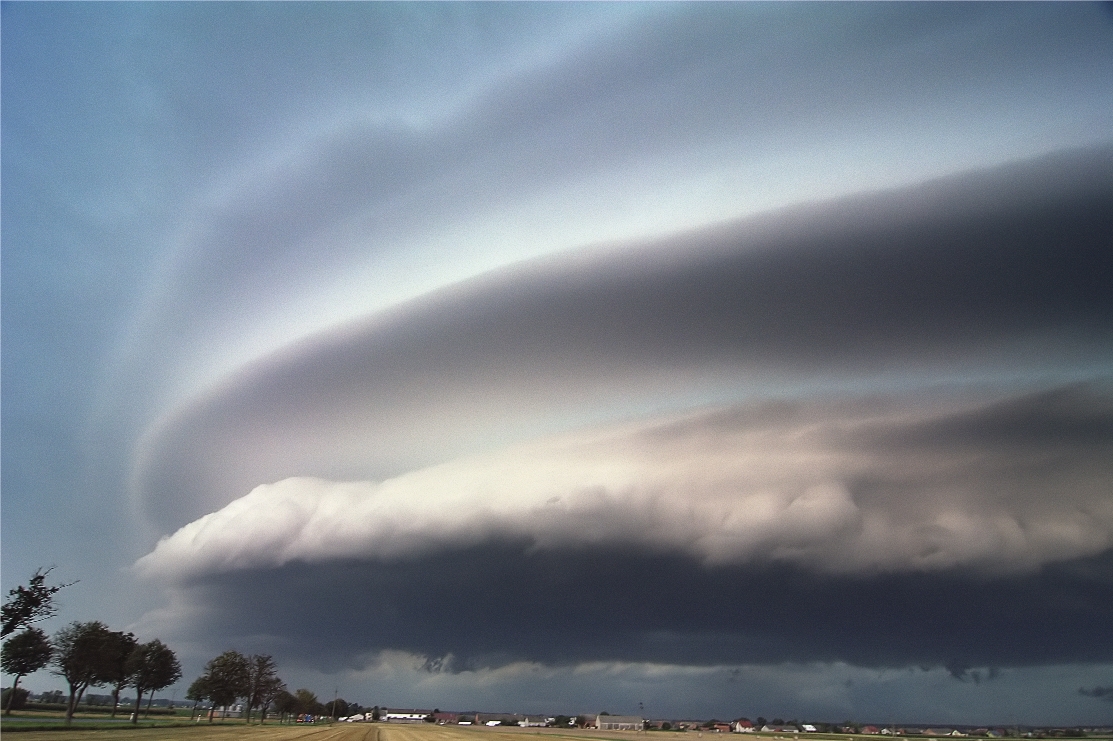 Fig. 3 Shelf cloud observed on the leading edge of the bow-echo near the town of Krotoszyn at 18:15 UTC. Photo by Mateusz Taszarek

At the height of the storm, 180 000 customers were out of power and many roads were blocked by fallen trees. Damage to the forestry was widespread (Fig. 4) with 39 200 ha of forests completely destroyed and 40 500 ha partially damaged. The volume of fallen wood reached almost 10 millions of m³. Together with 20 000 damaged buildings and financial costs of the storm estimated in the range of 500 millions to 1 billion €, this was likely the most impactful convective storm to hit Poland in decades.

Fig. 4 Aftermath of the 11 August 2017 convective windstorm in Poland. Photo by Grzegorz Zawiślak.

This convective storm was also record breaking for the ESWD. Altogether, more than 1200 severe weather reports were collected, which constitutes most reports ever submitted per event in the history of the database.

Environment capable of such extreme convective windstorm featured a deep cyclone at 500 hPa centered over the Alpine range with a belt of 20 + m/s southerly flow stretching from Croatia towards western Poland (Fig. 5). A short-wave trough was translating from Austria northwards. At the same time, a wavy frontal boundary extended from northwestern Austria through the Czech Republic into eastern Germany and western Poland (Fig. 6). In this setup, a warm and humid airmass has advected over Poland, with 2 m dew points exceeding 20 °C. Combination of high values of CAPE and a strong lower tropospheric shear, exceeding 20 m/s in the 0-3 km layer, created very favourable conditions for development of a bow echo (Fig. 7). Lift provided by cold pool from the already ongoing convective system and a well defined convergence zone located across western Poland resulted in widespread initiation of new convective cells, which quickly merged into a large convective system. 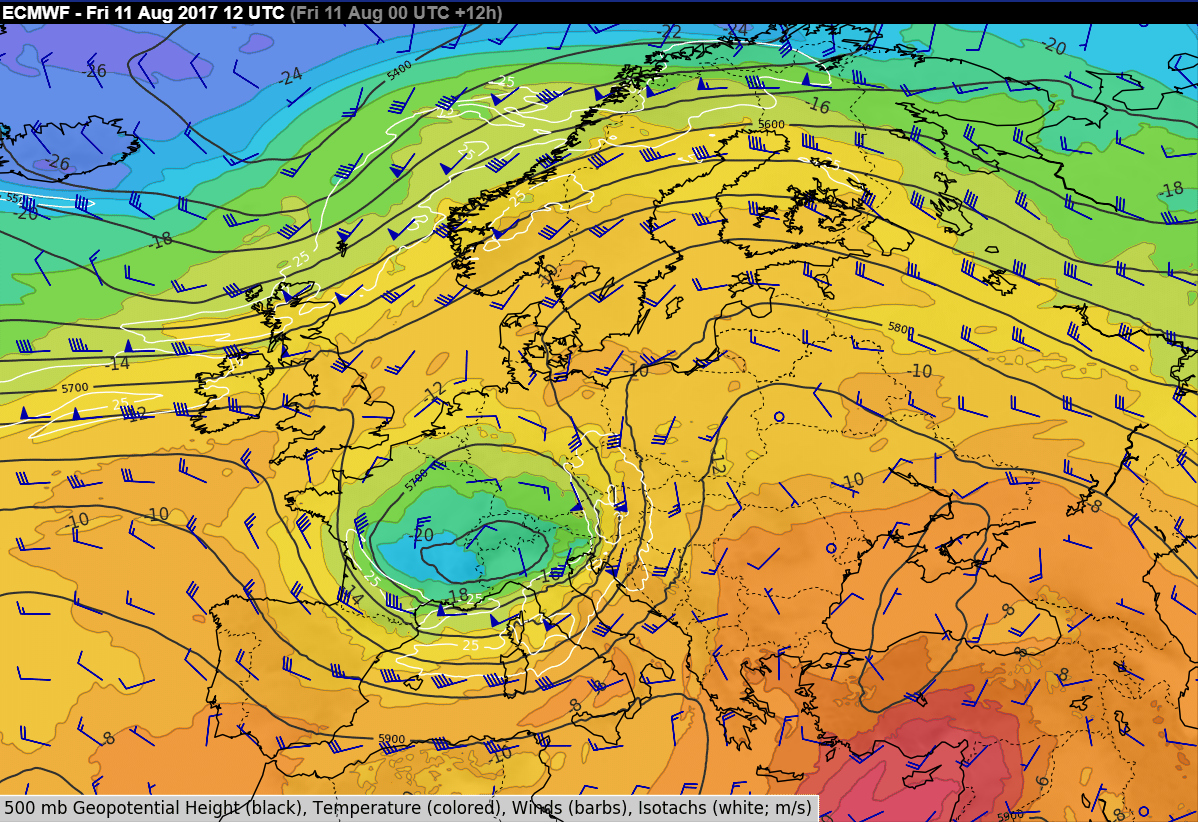 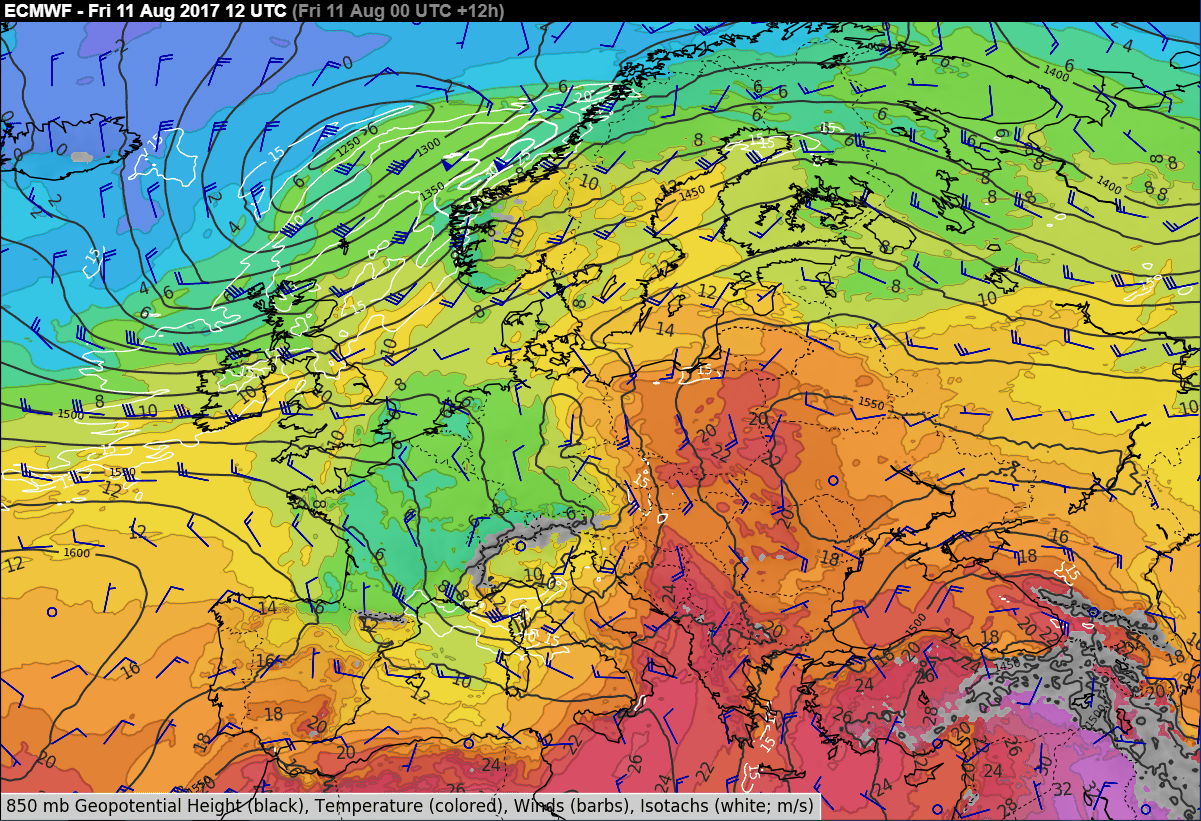 ESSL would like to thank Skywarn Polska and Amateur Meteorological Society of the Czech Republic for many submitted reports documenting the windstorm case. Furthermore, thank you goes to Artur Surowiecki for information on the impacts of the storm, Mateusz Taszarek and IMGW for the radar data, and Grzegorz Zawiślak for the photo of windstorm damage.