In addition to the certificate of participation ESSL offers the opportunity to take an exam (“European Testimonial on Forecasting Severe Convection I / II”) in connection with our seminars. The exam on Friday afternoon consists of a theoretical and a practical part and takes about one hour. Testimonial results will be given as a percentage of the total number of questions answered correctly (see examples below). The Friday afternoon on-site Testimonial can be taken without extra cost to the regular seminar fee.

On request the exam can be repeated later online (e.g. via Skype). In this case an extra fee of EUR 150,- would apply per repetition.

In the light of the decisions of the 17th session of the WMO congress (regarding required public weather service competences for warning meteorologists) your Testimonial might become valuable in the near future.

As of now the following persons have received proof for the highest level of knowledge in forecasting severe convection in Europe (FSC II):

As of now the following persons have received proof for the highest level of knowledge in forecasting convective rainfall and flash floods in Europe: 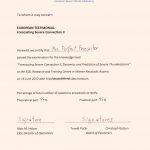 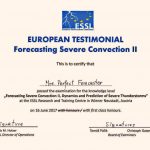