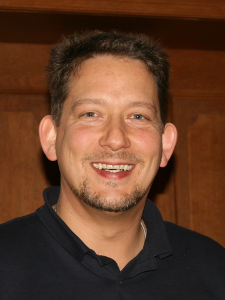 Nikolai Dotzek, born in 1966 in Bad Hersfeld, Germany, studied meteorology at the University of Karlsruhe where he graduated (diploma) in 1993 with a thesis on direct numeric simulation of turbulent Rayleigh-Bénard convection in 2D and 3D. From 1994 to 1999 he worked as a researcher at the Institute of Meteorology and Climate Research in Karlsruhe, first on wind energy assessment using mesoscale models (in the group of Prof. Fiedler) and later in Prof. Beheng’s group on mesoscale modelling of convective clouds over complex terrain for which he received a Ph. D. degree in natural sciences.

In 1999 he moved to the Institute of Atmospheric Physics of the DLR (German Aerospace Center) in Oberpfaffenhofen working on cloud physics, polarimetric radar, lightning, severe storms, satellite and tropical meteorology. As a scientist and member of the management team of the international research projects QUANTIFY and ATTICA, Nikolai Dotzek rapidly became a well-known and highly valued colleague within the community working on transport impacts on atmosphere and climate. Later, he became the project coordinator of the BMBF klimazwei project RegioExAKT and a contributing author to Working Group I of the 4th IPCC Assessment Report 2007.

Lead by his vivid interest in local severe storms, Nikolai Dotzek has made a name above all on his research work on convective storms and extreme weather events, and on tornadoes in particular. In 1997 he founded the network TorDACH which collected information on local severe weather events in Germany (D), Austria (A), and Switzerland (CH). The data set collected by this network – the first in Central Europe after the pioneering but not continued work of Alfred Wegener and Johannes Letzmann in the first half of the 20th century – was a precursor of today’s pan-European ESWD (European Severe Weather Database). Supported by a DLR fellowship Nikolai Dotzek visited the Storm Prediction Center (SPC), Norman, Oklahoma in 2002 to work on the proposal for a European Severe Storms Laboratory (ESSL). Upon his initiative, this vision became reality in 2006 when the ESSL was founded as a legal body with him as its first director. Since, the ESWD has been developed further within the ESSL and now comprises more than 26000 entries of severe weather events. In 2007, he was invited by the German Committee for Disaster Reduction to give a talk on a proposed concept of a European Storms Prediction Center.

During his scientific career Nikolai Dotzek published 29 papers in peer-reviewed journals, about 2/3 of them lead-authored; 5 more have been recently submitted. Additionally, he has presented his work at numerous conferences and contributed to several books, reports and monographs. He was one of the most important promotors of the series of European Conferences on Severe Storms (ECSS). Under his direction, the last and very successful ECSS conference was organized in October 2009 in Landshut. Since 2007, he has given lectures at Freie Universität Berlin on radar meteorology and extreme convective phenomena in preparation of his habilitation.

At the time of his unexpected death, Nikolai was in the midst of several exciting projects. His contribution to severe storms research in Europe and beyond is invaluable. As a person gifted with an exceptional skill to inspire people he will be missed by all those whom he inspired and who were looking forward to so much more to come from him. His memory will undoubtedly serve as a model and encouragement for many in the future.